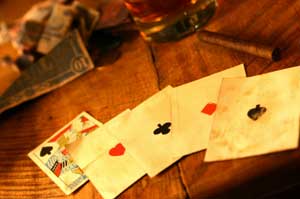 J.T. Colton was a Texas Ranger in the late 1800's with a passion for big steaks and playing poker. J.T. was a friend, fellow lawman and gambling buddy of Sheriff Matthew Dillon. Matt owned a steakhouse and gambling hall in Dodge City, Kansas, called Dillon's Tin Star Saloon. When J.T. wasn't chasing desperados in Texas, he spent most of his time in Dodge City, playing cards at Dillon's and trying to tell Matt how to run things.

Legend has it that J.T. proceeded to win the Tin Star Saloon from Matt in a four-day poker game that took place in a back room at Dillon's between J.T., Matt, a guy named Holiday and several other gamblers of questionable character. There was speculation that Matt lost on purpose because he was tired of J.T. telling him how to run his business.

J.T. promptly gave up being a lawman, changed the name of Dillon's Tin Star Saloon to Coltons Steak House and Grill, and spent the rest of his days cooking up the best steaks east of the Rockies. In his later years, he returned to Texas where he opened a Colton's in his hometown of Moose River. J.T.'s legend lives on to this day, as well as his secret to cooking the juiciest, most tender steaks around.